The telethon is a highly anticipated event each spring and features a host of national performers and Saskatchewan talent. For visiting celebrities, it’s an opportunity to participate in an event that really does make miracles happen. For local performers, it’s a chance to support their friends, family and neighbours, and to perform on a big stage to the delight of a viewing audience that spans the province.

The money raised at Telemiracle provides resources to residents with specialized needs for medical assistance and equipment, such as:

Throughout the year, Saskatchewan people of all ages with special needs apply to the Kinsmen Foundation for financial assistance. The resulting miracles are varied, but the goal is always the same – to have a direct, positive affect on each recipient’s quality of life.

The Kinsmen Foundation was established in 1971 to manage the money raised by Saskatchewan Kinsmen and Kinette clubs. It quickly became apparent that the demand for dollars exceeded the dollars that were available. As a result, the first Telemiracle was aired in 1977 to enable the Kinsmen and Kinettes to serve even more of their communities’ greatest needs.

Today, there are over 700 Kinsmen and Kinettes who volunteer countless hours of their time in various different ways to organize and put on the show. There are also approximately 125 production people who travel from across Saskatchewan to operate cameras, audio and lighting. Combine these with the thousands of Miracle Makers across the province who generously support Telemiracle with their kind donations and you have a success! The whole province shares in the great success of Telemiracle. 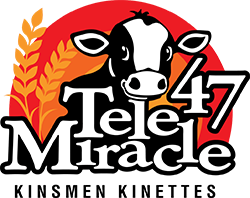 Who We Help
Thanks to your donations to Telemiracle, the Kinsmen Foundation has the opportunity to improve the quality of life and the independence of hundreds of people every year. Saskatchewan residents are able to access special needs equipment and medical assistance that wouldn't otherwise be attainable.

Helping Individuals
Innovations like ceiling track sysytems, portable lifts and ramps, funded by the Kinsmen Foundation, are making it possible for people to live at home and still receive the care they need. And with equipment like specialized wheelchairs, electric scooters, vehicle conversions and communications devices, people are achieving a level of independence they didn't think possible.

When people can't access the level of care they need at home, they must often travel to health care facilities in other parts of the province or country. And while the medical procedures are covered by health care, the patients and their families must pay for their own travel, meals and accommodations. By easing the financial strain, the Kinsmen Foundation allows families to focus on what only they can provide - love and care.

Helping Groups
Across our province, loving care homes have been established with a family atmosphere to provide comfort and care to people with special needs. The Kinsmen Foundation provides funding for things like ceiling track systems, specialized tubs, lifts, specialty beds and personal care equipment to make those homes even better suited to provide quality care.

Challenges are what make life interesting and overcoming them is what makes life meaningful.

Kin Canada is an all-Canadian service organization made up of dedicated member volunteers who serve their community’s greatest need through hosting and sponsoring events and community service projects. Since its founding, Kin, Kinsmen and Kinette clubs across Canada have contributed more than $1 billion to Canadian communities and disaster relief programs beyond our borders.